The God Who is There

"And the LORD looked upon him, and said, Go in this thy might, and thou shalt save Israel from the hand of the Midianites: have not I sent thee? And he said unto him, Oh my Lord, wherewith shall I save Israel? behold, my family is poor in Manasseh, and I am the least in my father's house. And the LORD said unto him, Surely I will be with thee, and thou shalt smite the Midianites as one man."
Judges 6:14-16

The greatest promise that God provided to Gideon, which guaranteed victory in his calling, was the promise of His presence – “Surely I will be with thee, and thou shalt smite the Midianites as one man,” (Judges 6:16).  It was this promise to which Gideon often returned and sought reassurance of its truthfulness and it was this promise that gave Gideon the backbone to confront an overwhelming task.

To those who have placed their faith in Jesus for their salvation, God gives the same precious promise – “I will never leave thee, nor forsake thee,” (Hebrews 13:5).  Just as that commitment shored up Gideon’s resolve to follow God’s plan, so the promise of God’s presence provides the much-needed elements for victory in the Christian’s life.

Christian, I do not know what challenge you might be facing, today.  But I do know that it has not come your way without passing through the hands of your loving God.  He has a purpose for it and He will walk through it WITH YOU – every step of the way.

When I Am Weak

"And the children of Israel did evil in the sight of the LORD, and served Baalim: And they forsook the LORD God of their fathers, which brought them out of the land of Egypt, and followed other gods, of the gods of the people that were round about them, and bowed themselves unto them, and provoked the LORD to anger."

The historical narrative of the book of Judges might best be described with the following chart: 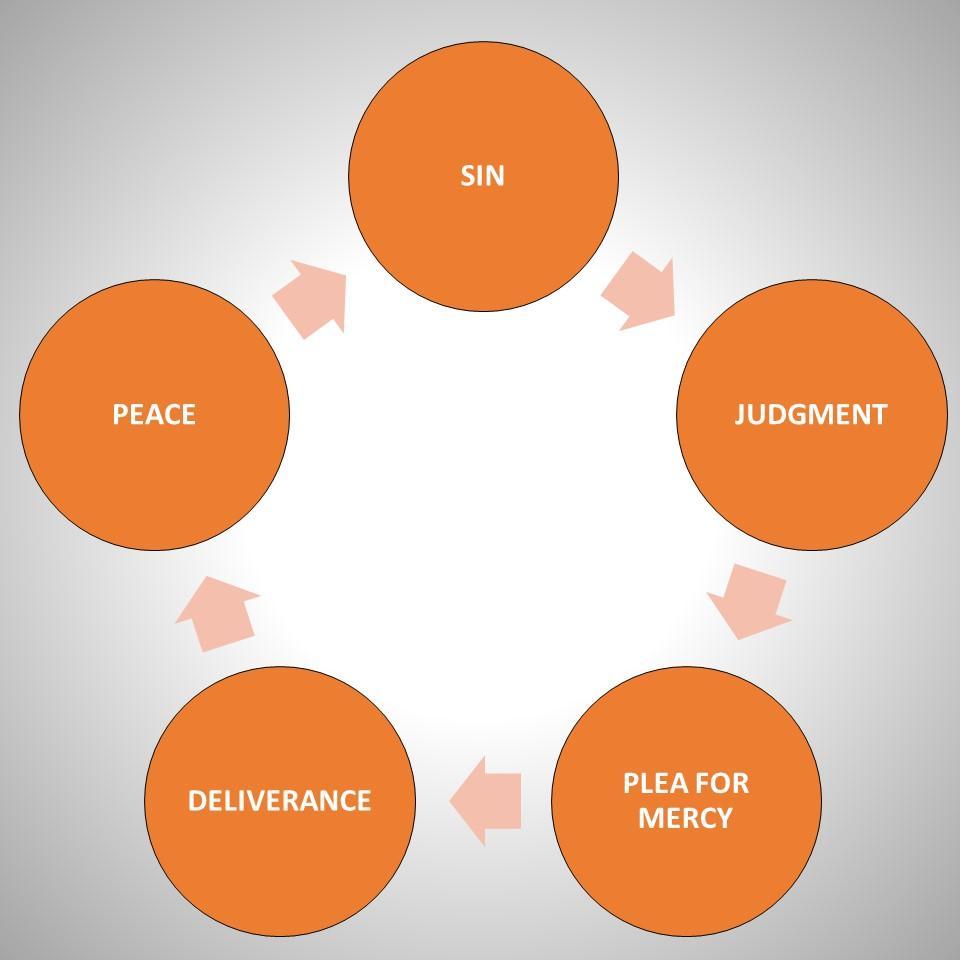 Judges 21:25 tells us that “In those days [at that point in Israel’s history] there was no king in Israel: every man did that which was right in his own eyes.”  You can imagine the chaos that ensued, as they chose to go their own way (Isaiah 53:6).  However, with those choices came the consequences of their decisions.  Their sin – their rejection of God’s way – led to God’s judgment through invading armies, foreign captivity, or even death.  Eventually, the people grew tired of the consequences and called out to God for deliverance, pleading for His mercy.  In response, God sent judges, whom He would use to offer deliverance from the foreign invaders.  That was often followed by a period of peace, which would last until the people grew complacent and want back to their own ways.  Thus, the cycle started all over again.

The judges God used were far from perfect.  Each had their own limitations and weaknesses.  But the success of their ministry did not depend on their skills and strengths.  Rather, God chose to use weak vessels so that the people of Israel would know that deliverance was coming from Him, rather than the power of man (1 Corinthians 1:26-31).

Over the next few weeks, we are going to examine some of those judges – their strengths, weaknesses, victories, and defeats.  In the process we will see ourselves – flawed as we are.  Yet we will also draw comfort in the reality that God uses flawed people so that the greatest goal of all can be accomplished – He is given honor and glory (1 Corinthians 1:31).

When I am discouraged, when I am painfully aware of my weaknesses, when I feel like a failure, I go back to read God’s interaction with Paul, at a point in time in which he was feeling the weakest: “And he said unto me, My grace is sufficient for thee: for my strength is made perfect in weakness.  Most gladly therefore will I rather glory in my infirmities, that the power of Christ may rest upon me.  Therefore I take pleasure in infirmities, in reproaches, in necessities, in persecutions, in distresses for Christ’s sake: for when I am weak, then am I strong,” (2 Corinthians 12:9-10).

Jesus Knew...Yet Still He Did It

"Now before the feast of the passover, when Jesus knew that his hour was come that he should depart out of this world unto the Father, having loved his own which were in the world, he loved them unto the end."

In recent days, my Scriptural meditation has focused on the days and hours leading up to Jesus’ betrayal, arrest, trials, and crucifixion.  His entire life was preparation for what was about to take place.  But that preparation moved into high gear as the countdown clock moved closer to 0.  The urgency of His ministry and the directness of His teaching, particularly with His disciples, becomes even more apparent.

John’s account of the events in the Upper Room is singularly poignant in its detail and emphasis on Jesus’ thinking process and spirit of ministry.  A great example of that detail is the record of Jesus washing the feet of the disciples (John 13:1-17).  In re-studying that passage for an upcoming Sunday School class, I was caught by how many times John says that Jesus “knew” something yet followed through on this humble act of service.

I know that it is hard to remain focused on our mission of service when troubles abound.  But let us allow the example of Jesus to challenge and encourage us to keep going for Him.

It Is Well With My Soul

"Thou hast put gladness in my heart, more than in the time that their corn and their wine increased. I will both lay me down in peace, and sleep: for thou, LORD, only makest me dwell in safety."

One of my favorite hymns is Horatio Spafford's "It Is Well With My Soul."  Born out of a season of intense grief, this hymn reminds me that whatever may swirl around me - no matter how chaotic the world may seem - because my faith rests in the promises of the unchanging, faithful God, I can be at peace.  My body may be ravaged by disease and pain - as so many Christians have experienced - but those same afflictions can never touch my soul.  My friend, can you say, with absolute assurance, that it is well with YOUR soul?

Whatever my lot Thou hast taught me to say,

Though Satan should buffet, though trials should come,

That Christ has regarded my helpless estate

And hath shed His own blood for my soul.

My sin - O the bliss of this glorious thought -

My sin, not in part but the whole,

Is nailed to the cross, and I bear it no more.

And Lord, haste the day when my faith shall be sight,

The clouds be rolled back as a scroll!

The trump shall resound and the Lord shall descend!

It is well with my soul!

It is well, it is well with my soul!

A special thank you to arranger Shelly Hamilton for this beautiful piano arrangement of Horatio Spafford's hymn, recently released on YouTube.